Privatization of airports: pros and cons, The Assam Tribune 7-December-2018 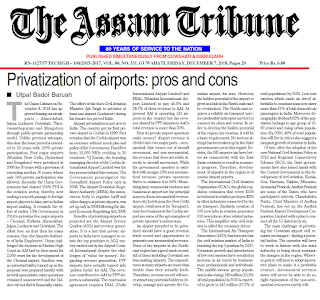 Privatization of airports: pros and cons

Union Cabinet on 8th Nov, 2018 has approved leasing out six airports - Ahmedabad, Jaipur, Lucknow, Guwahati, Thiruvananthapuram and Mangaluru through Public Private Partnership model. Unlike previous attempts, this time the lease period is extended to 50 years with 100% private participation. Four major airports (Mumbai, New Delhi, Hyderabad and Bangaluru) were privatized in 2006 for 30 years with a provision of extending another 30 years. Only 74% private participation was allowed. Recently, Union Government had cleared 100% FDI in aviation sector, thereby, now making a smooth passage to foreign airport players to take part in Indian-airport-making. It reminds the effort of earlier UPA government in 2014 to privatize five major airports – Chennai, Kolkata, Ahmedabad, Jaipur, Lucknow and Guwahati. The effort bore no fruit then for many reasons. One, the Airports Authority of India Employees’ Union challenged the decision in Madras High Court as AAI had by then spent Rs.2000 Crore for the development of Chennai airport. Another was, no potential bidder turned up as the proposal was prepared hastily with several open points, many question remained unanswered and bidder did not find it financially viable. The utmost effort of the then Civil Aviation Minister Mr. Ajit Singh to privatize at least one airport (Lucknow) during his tenure too proved futile.
Airport privatization is not new to India. The country got its first private airport in Cochin in 1999. Fact remains that Cochin airport was an outcome without much plan and policy of the Government. Fund flew from ten thousand NRIs residing in thirty countries. Mr. V.J. Kurian, IAS, the founder Managing Director of Cochin International Airport Limited was the key person behind this venture. The Government promulgated Greenfield Airport Policy only in 2008. Airport Economic Regulatory Authority (AERA) the autonomous body to regulate tariff and other charges at private airports was set up only in 2008 following the Airport Economic Regulating Act 2008.

Benefits of privatizing airports as projected among many others are the Airport Service Quality (ASQ) and revenue generation. It is a fact that private airports in India have managed to retain the top positions in ASQ survey carried out by Airport Council International despite the challenges of “value for money”. Regarding revenue generation, PPP airports have actually turned into “golden ducks” for AAI. The revenue contributed to AAI by PPP airports is substantial. The concession agreement requires DIAL (Delhi International Airport Limited) and (Mumbai International Airport Limited) to pay 45.9% and 38.7% of their revenue to AAI. At present AAI is operating 133 airports in the country but the revenue shared by PPP airports to AAI’s total revenue is more than 30%. (2015-16: 31.2% and 2016-17: 30.6%)
How do private airport operators make money? Airport revenue is divided into two major parts- aeronautical, that comes out of aircraft movement and non-aeronautical, the revenue that does not relate directly to aircraft movement. While government operator is satisfied with meagre 10% non-aeronautical revenue, private operators thrive to enhance it to 50%. Monetizing land, commercial ventures and business at airport are the principal sources of non-aeronautical revenue. Aero city hotels near New Delhi airport, retail area at terminal 3, duty free business at Cochin airport are some of the apt examples of private operator’s endeavors.
An airport intended to be privatized should have a good revenue track record and opportunities to generate non-aeronautical revenue. None of the airports in NE Region has a good track record. All of them including Guwahati are loss making airports. Expenditure at many airports are more than double than they actually fetch. Therefore, revenue record will never attract any potential bidder to develop, manage and operate Guwahati airport, for sure. However, the hidden potential of the airport to grow as a hub in the North East can’t be overlooked.  North East requires a reliable air transport service (preferably helicopter service) to connect its cities and towns. In order to develop the hidden potential of the region, the tourism, it will be a basic requirement. No serious attempt has been taken up by the state governments yet in this regard. Besides, the NE airports can have better air connectivity with the east Asian countries to result in economic progress. Therefore, development of airports in the region are of course utmost priority.
International Civil Aviation Organization (ICAO), the global regulator estimates that every $100 investment in aviation produces $325 in other industries connected by the air transport. Similarly, creation of 100 new jobs in aviation generates 610 new jobs in other related industries. This amplifies why civil aviation is called the economic driver.
International Air Transport Association (IATA) has forecast that civil aviation market of India is reaching the top 3 position by 2020. Air passenger growth rate (Year on Year) in India is the highest in the world, more than 20% against the world average 3.8%. In terms of “air trips per capita” India remains at very low (0.04) whereas China, Brazil, Malaysia remains at 0.15, 0.25 and 0.54. In terms of population, China has 15% more than that of India but China’s domestic air passenger size is 5 times more than that of our country. India has 1 aircraft for every 2.89 million populations but corresponding population size against 1 aircraft in China, Indonesia, Philippines and Brazil are 1.14 million, 0.96 million, 0.89 and 0.63 respectively. Economic growth and introduction of low cost carriers have resulted in increase in air travel by businessmen, professionals and individuals. The middle-income group population is also rising; 160 million (13.3% of total population) in 2010 is expected to grow to 547 million (37.2% of total population) by 2025. Low Cost Carrier which made air travel affordable to common man carries now more than 67% of total domestic air passengers in India. Moreover, demographic dividend (62% of the population belongs to age group of 15-60 years) and rising urban population (By 2030, 40% of total population will live in cities) also suggest a rampant growth of aviation in India.
Of late, after adoption of the new National Civil Aviation Policy in 2016 and Regional Connectivity Scheme (RCS), the state Governments have also joined hands with the Central Government in the development of civil aviation. Kerala, Goa, Haryana, Sikkim, Mizoram, Arunachal Pradesh, Andhra Pradesh are some of the states who have participated actively. Mr. Chandrababu Naidu, the chief minister of Andhra Pradesh has set up “Andhra Pradesh Airport Development Corporation Limited” with a plan to connect all the 13 districts by air.
The main challenge of privatizing Guwahati airport still remains unchanged – finding a potential bidder. The Operator will have to work in liaison with the state authority to bring about sustainable changes in the region. Whoever gets it, will have to adopt innovative plans to make it a profitable venture. Aeronautical revenue alone will never be able to do so, right exploration of the non-aeronautical resources surely will.
Posted by Utpal Badol Baruah at 12:55 AM