Tribute to a sculptor of Assamese words: Toufique ud-din Ahmed 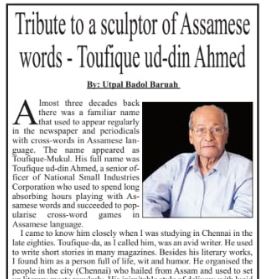 Tribute to a sculptor of  Assamese words (Toufique ud-din Ahmed)

Almost three decades back there was a familiar name that used to appear regularly in the newspaper and periodicals with Cross-words in Assamese language. The name appeared as Toufique-Mukul. His full name was Toufique ud-din Ahmed, a senior officer of National Small Industries Corporation who used to spend long absorbing hours playing with Assamese words and succeeded to popularize cross-word games in Assamese language.

I came to know him closely when I was studying in Chennai in the late eighties. Toufique-da, as I called him was an avid writer. He used to write short stories in many magazines. Besides his literary works, I found him as a person with full of life, wit and humor. He organized the people in the city (Chennai) who hailed from Assam and used to set up literary meets regularly. His inimitable style of delivery with lucid Assamese words made him popular amongst the community. He unconditional love for people was unparalleled. An example, one day, the Hindu carried out a news that wife of one Assamese person passed away and her cremation would be in the evening same day. Toufique-da did not know the person personally but could imagine how much hardship the family would undergo in that situation. Finally, he could not resist himself and with the little information he could collect from the newspaper, reached the graveyard in the evening to offer his help.  This is something unbelievable now-a-days. He was like a guardian to the student community from Assam studying in the city that time.

Once, Dr. Bhabendra Nath Saikia, the legendary writer of Assam went to Chennai. Toufique-da him and his wife for lunch. I vividly remember, Dr. Saikia was surprised to see his etymological command in the Assamese language and advised him to write in the Prantik.

Toufique-da survived a stroke in early nineties and went paralyzed. His wife Arifa Mahee took good care of him for almost three decades. Most of his time, he lived in Chennai and then shifted to Bangalore. His three daughters Ritu, Palki and Gargi did extremely well in their studies and established their own identities. He has breathed his last on 22nd June this year. Hw was born in Lichubari, Jorhat in 1942. He was a true Assamese person in his thought and action.

Today, on the day of his “Challisa”, I pay my sincere tribute to him. May God shower His best blessing upon his soul.

Posted by Utpal Badol Baruah at 1:27 AM